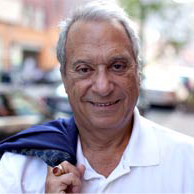 Joseph Lovett started Lovett Stories + Strategies (as Lovett Productions, Inc.) in 1989 after 10 years as a producer at ABC News 20/20, following 5 years as an editor and producer at CBS News Magazine which was created as a daytime 60 minutes for an at home audience.

Before working for the networks, Joe was a freelance editor and assistant working on networks, features and industrials. He had gotten into film as an MFA student at Columbia, but with his first year culminating in the Columbia Student Strike, he had no inclination to go back to return to the Columbia campus.

At 20/20, Joe was best known for having presented the first television investigations into the US government’s inaction on the AIDS epidemic. As an openly gay producer, Joe was able to fight for the story being in a situation to know what was going on. He was a generalist doing stories on Mike Tyson, the Duvaliers, celebrity profiles, airline safety, and other medical issues. He often represented ABC at health risk conferences.

Joe opened Lovett Productions, Inc. in 1989 with the idea that as a former top network producer from a major prime time magazine, he could produce industrials the profits from which would allow me to make the independent films he wanted. What he found was that corporations were reluctant to work with new people and that some internal communications people could feel threatened by a seasoned network producer. So getting into the industrial field – which finally did happen – required a lot of salesmanship.

However, Joe was soon being asked to produce network documentary hours, the first of which was AMERICA’S MISSING CHILDREN for CBS.

Shortly thereafter he developed IN A NEW LIGHT for ABC which is an AIDS educational outreach and entertainment annual special. It ran annually from 1992 – 1996 and was developed in conjunction with the US Centers for Disease Control and Prevention in Atlanta.The project was greenlit by Phil Beuth, then president of early morning and late night at ABC. Phil was a champion of the fight against AIDS having lost his son Barry to the disease. Because of his prominence he was able to get the shows extraordinary publicity, earning them excellent ratings.

In 1999, Joe directed and produced his first feature doc THE ACCIDENT, a Rashomon type film about his family. It did very well in the festivals, but was never released due to prohibitively expensive music rights.(https://www.austinchronicle.com/screens/1999-03-26/521668/)

That film led to Sheila Nevins asking Joe to produce CANCER:EVOLUTION TO REVOLUTION, a 2.5 hour television event for HBO which won the Peabody Award for the 2000 season. We have C:ETR  on Youtube for free viewing. For HBO, we also produced THREE SISTERS SEARCHING FOR A CURE (Tribeca premier) on ALS and TOO HOT NOT TO HANDLE on climate change.

Lovett’s film GAY SEX IN THE 70S premiered at the Tribeca Film Festival 2006, had a great international festival life, strong theatrical distribution, and a run on the Sundance Channel. GSITS  is still being distributed through the film’s website and on iTunes. It has become a classic, regularly referred to in discussions of gay life and still enjoying occasional screenings. Lovett is currently working to get GSITS into university and public libraries and to re-release the film through a series of screenings to commemorate the 50th anniversary of the Stonewall Riots in 2019.